A drizzly day for Mick and Frank H started with a rainbow:

With uncanny accuracy, the left-hand arc of the bow seemed to be pin-pointing the small, stone bridge on the path between Lane Side Farm and Harleywood Gate - the rush for a pot of gold was on! 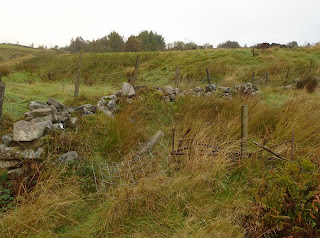 It was a false hope!
Instead we found a path (just) and a semi-buried tangle of stock-fence, barbed wire, decayed posts, old bedstead, rotten rails and a metal gate rusted into a state of fragility.
A disproportionate amount of time and energy was devoted to digging out this trampled mess and generally clearing the site. The real effort could then begin . . . and the outcome doesn't look much for a day's very hard work! 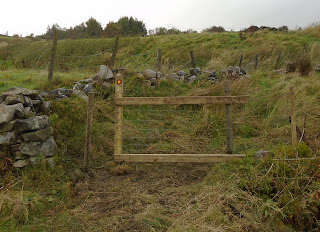 The aim was to create a gap accessible for walkers but narrow enough to deter larger livestock (ie horses). It was, therefore, a session of re-instating, repairing, re-cycling and re-building.
*A waymarked post has been installed and an existing fence post re-bedded. Cross-rails and re-cycled stock fencing have been added between them.
*A 'gap' post has been installed between the wall and the waymarked post.
*The area to the right drops steeply down into a stream and the original tangle of  material that blocked off this section was left in place.
The stream crossing is a really well-constructed bridge (not visible in the picture because it is under the grassed foreground) and its stonework extends significantly into the approach track. Consequently, getting the waymarked post in place required a very strenuous effort with Mick's ultra-heavy bar . . .  the use of which Mick delegated to Frank (Thanks, Mick - another high intensity upper-body workout!)
There may be some further work needed here - e.g. cutting back of the path line, adding more rails to the existing structure and stabilising the wall near to the gap.
Today's work was funded by donations.
Wednesday 6th and 13th October
Clough Hole
Ray and Nick worked for two consecutive Wednesdays by Clough Hole, below Raw Lane, on the path descending to Stephenson House.
They replaced several rotten steps and fitted two lengths of revetment on a section of eroded path that was slipping down the hillside. They also installed a section of pipe to channel water run-off from the hillside. Lower down the path, they unclogged existing drainage channels to reduce water encroachment on to the footpath. 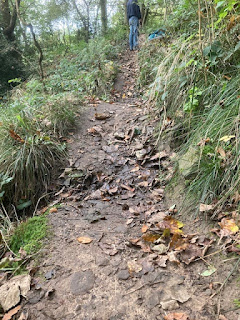 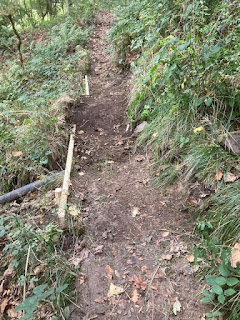 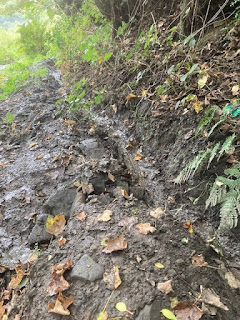 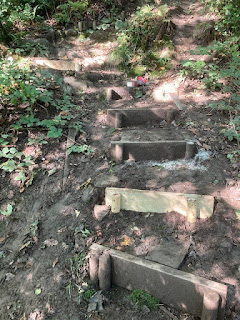 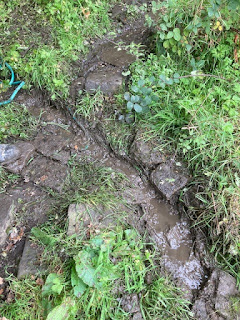 Types of work done by CROWS, when and where : 2021, B'shaw, Z other work
Newer Post Older Post Home