On a bright sunny day Ken and Frank H were in a shaded, damp, mossy corner attempting to rectify deficiencies in a structure that seemed to be a cross between a ladder stile and a set of open stairs! 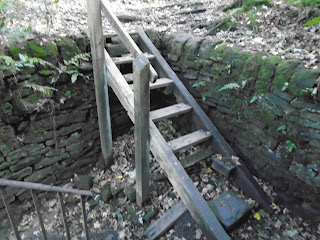 This structure is interesting. It may have started life as a ladder (perhaps in a mill) to access a platform. Subsequently it seems to have been flipped over and, with some ingenuity, converted into a set of open stairs.
However time has taken it's toll. The bottom step has collapsed and other steps show signs of rot in the tread support battens and in the treads themselves. Additionally the stair is very open! Walkers are in danger of placing their feet between treads rather than on them!
Here's the solution: 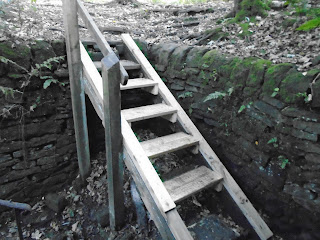 Both side stringers have been reinforced with lengths of  100 mm x 50 mm rail. This created enough side depth to accommodate the longer support battens that will hold a doubling of the tread-board area.
Despite there being more decay in the stringers than expected, enough sound timber was found to give a good grip for screws or screw-nails.
The 'steps' are level, secure and safe, and had their first test by being easily negotiated by an elderly pensioner with two artificial hips!
Team 2 Ripponden/Barkisland - Path between Upper and Lower Coneygarth
Unlike poor Ken and Frank H, Catherine, Lynda and Eleanor enjoyed glorious sunshine while clearing this lovely path rising in the direction of Krumlin - part of the Barkisland Village Walk network. Determined to do a thorough job, we concentrated on pulling out the brambles by the roots. Hard work but rewarding. 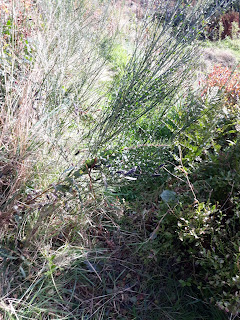 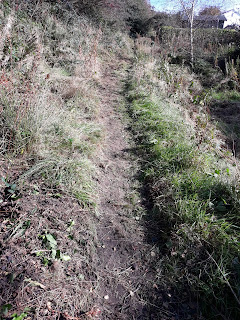 Better - and hoping that now the brambles won't be such a problem for a year or two. 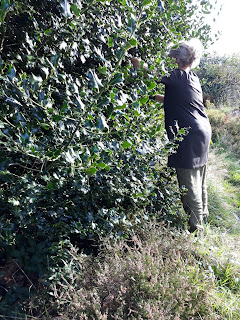 Catherine getting stuck into a holly bush overhanging the path! There is a short section still to do but it should take just one more session. We were offered a cuppa by the kind and appreciative occupant of a nearby house. She was pleased the path was soon to be publicised as a way of keeping it properly open, as she has done her bit over the years to cut back the section near her house.
This work is funded by Ripponden Parish Council

Types of work done by CROWS, when and where : 2021, Cut back, Ripp, Steps
Newer Post Older Post Home