Lynda, Ian, Bernard and Eleanor returned today to complete the clearing of Wood End Lane, part of the Barkisland Village Walks network. We were joined for some of the time by Annie, a Ripponden resident who is interested in joining CROWS and wanted to see what sort of things we did!. She and a friend have been clearing balsam and cutting back vegetation in the vicinity of their homes. Natural CROWS I'd say! 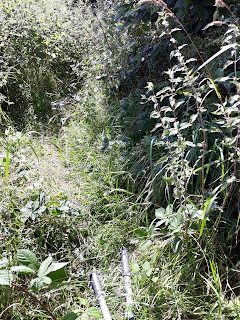 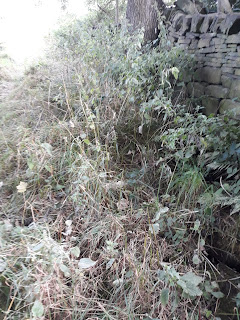 There is a deep channel running alongside one of the walls, but it was smothered by vegetation. 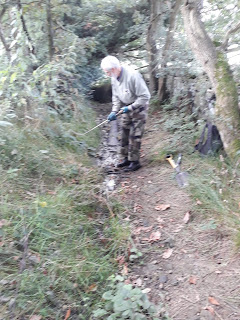 Bernard, having abandoned the small strimmer which wasn't quite up to the job, is now using one of his favourite tool - the slasher!! 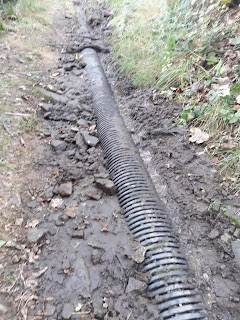 There is a very substantial drainage pipe running down the length of the lane, but unfortunately the water only intermittently ran through it. Ian dug a very serviceable channel alongside the pipe to contain the spread of water until a longer term solution can be found. We concluded that the scale of the work needed is probably too big a job for CROWS. 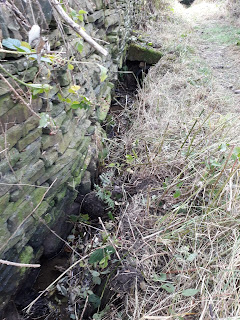 We cleared the channel under the wall and revealed at least one opening into the pipe, but decided that there must be some kind of blockage further down or maybe a break in the pipe. We revealed the channel where it surfaced to prevent walkers and riders inadvertently falling into it! 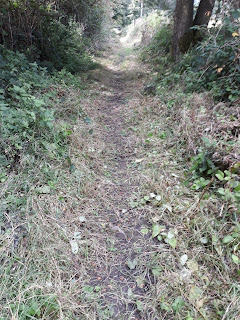 A whole lot better! Probably needs doing annually. Nice comments from a couple of walkers as we worked.

This work was funded by Ripponden Parish Council.

Types of work done by CROWS, when and where : 2021, Cut back, Drainage, Ripp
Newer Post Older Post Home