Frank, Frank (so good they named us twice!) and Ian S were out above Nest Lane, where Wood Hey Lane joins Park Lane. A path comes down from Haven Wood and arrives at a stile by the road. Unfortunately this stile collapsed a few weeks ago and was in dire need of attention. Here's how it looked originally . . . 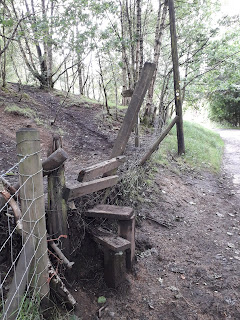 Both side-posts are rotten and the taller post has broken off at ground level. The cross-rails are becoming detached and the stock fencing beyond the stile is a patchwork with rotten fence poles hanging from it.
The path through Haven Wood is signed as a public footpath but unfortunately has been heavily scoured by the illegal activities of  mountain bikers who also may have contributed to the damage sustained by the stile.
A large amount of debris has washed down and buried the wood/field side of the stile steps. This debris is so impacted that it forms a small embankment which we decided not to excavate. Consequently the stile will have two steps up from the track and then a step over on to a flatish area.
With work under way it looked like this . . . 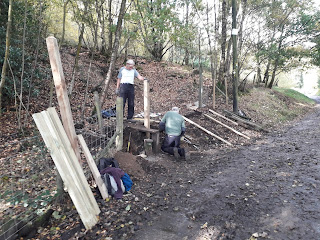 The stock fence has been temporarily taken down. New poles are laid on the ground ready for fence construction and the new right-hand stile side-post is in place. Lots to do but with Frank S i/c lump hammer, Frank H i/c bar and Ian S i/c post-hole spade, success is assured (we hope!). 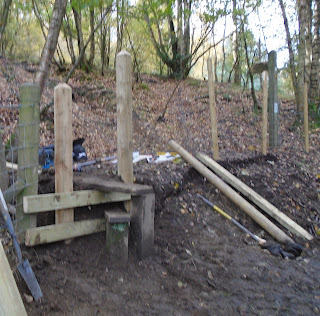 Some new fence poles are in place and stock fence to the left of picture has been tidied-up and re-tensioned. 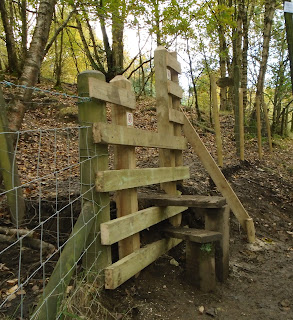 Stock fence (to right of picture) replaced and tensioned' Extra cross-rails added and a diagonal brace in position to improve stability.

No Cycling signs have been attached - we have limited hopes for their effectiveness! 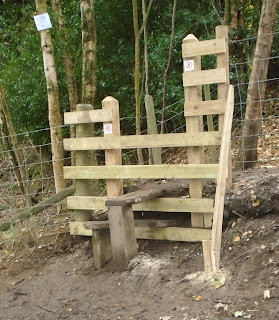 Similar view of the stile itself. Original steps (in sound condition) still in place. Stile side-posts firmly embedded. Stock fence tensioned to a separate pole rather than to the side of the stile. Diagonal brace to stop any unwanted movement.

There is still some work to do. The height of the top rail is quite low relative to the field surface and not much of a barrier for the goats that sometimes graze in the field. However, we have a plan to solve this problem . . .

Today's work generated a lot of comment from passing walkers who expressed admiration for CROWS' efforts. We would like to thank them for their interest and also to thank the nearby householder who kindly provided a mid-afternoon brew of tea!