Rich and Graham L worked on the route of one of the Barkisland walks due to be published later this year.

The first job was to find the beginning of the path!

We then followed the path through Acorn Wood (mainly beech trees!!) to work on the two main jobs:

We then moved on to the sunken bridleway called Wood End Lane which was difficult to access because the steps down were overgrown with brambles and some of the stonework was misaligned.

We cleared the steps of encroaching brambles/nettles and then levelled the top step before  rebuilding part of the wall above.

Wood End Lane was also partially cut back, but a second session will be needed to finish the job.

It was a very hot day and we can't tell you how grateful we were for glorious supplies of ice cold water and Soleros provided by Wood End Farm!

Meanwhile, far away on another hillside Billie and Paul worked on three sites on or near the Pennine Way. A variety of jobs including, some cutting back where the path leads up from Winters Lane, repairing a stile off Badger Lane and replacing a yellow-topped waymark post downfield toward Colden Clough. We enjoyed a fair morning breeze followed by fierce afternoon heat that caused us to retire gracefully to our respective homes for ice creams and cold drinks. 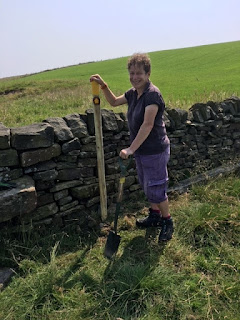 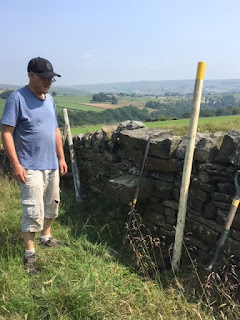 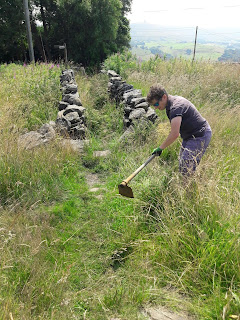 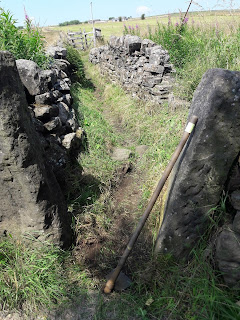 Types of work done by CROWS, when and where : 2021, Cut back, Ripp, Steps, waymarking
Newer Post Older Post Home