Mick, Catherine, and Frank S were today at the entrance to the Bride Stones on Eastwood Road, Blackshaw Head. Opposite the entrance is a lay-by which has had a lot of use since we were last there two years ago, and it was in dire need of some care and attention. There were several deep ruts and in some places the surface was below the level of the roadway allowing the edge of the road to crumble. Mick arrived at 8am and cordoned off a section of the lay-by to stop others parking there. 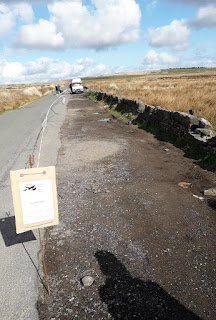 Here's a view of one of the muddy patches. 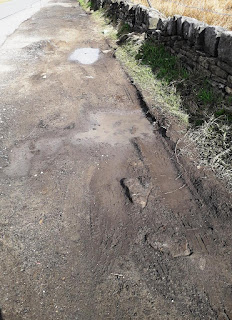 By nine it was sunny and crisp and we were all ready and waiting for a lorry with 10 tonnes of road planings (recycled tarmac). After a few phone calls it eventually it arrived and dumped its load in piles along the lay-by. 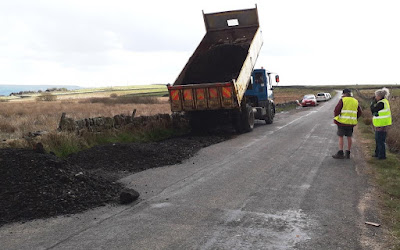 All we had to do then was to barrow it along and rake it smooth. 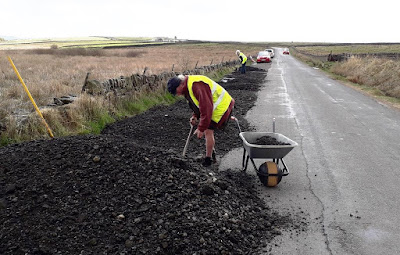 The result was a slightly lumpy lay-by ready for the cars to compact it and roll it smooth. The finger post, pointing to the Bride Stones, that we put up two years ago is just visible on the right. 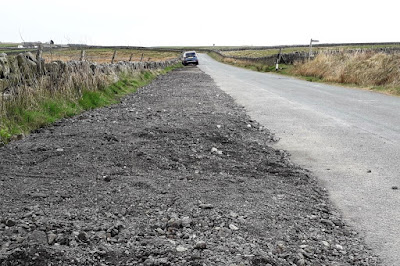 This work was funded by the Reaps Moss Windfarm.

Types of work done by CROWS, when and where : 2021, B'shaw, Z other work
Newer Post Older Post Home