Stella and Mo were out today in Mytholmroyd. They started off by putting a waymark post on the Cardiem path. It was a recycled post but effective nonetheless and then, to make sure people could see the path past the Cardiem factory, they put a stick-on waymark on the metal bridge. It just makes the published walk around Mytholmroyd easier to find. 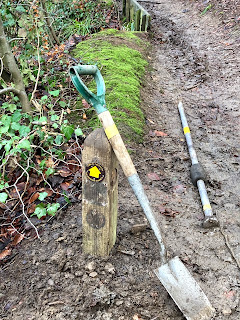 It didn't take long though so they went up Hoo Hole lane to the path that wends its way up the hillside. There was a very muddy stretch just at the start of the walled and grassy path. Mo scraped off the surface mud to reveal a stony path beneath. (She always gets herself covered in mud)  Meanwhile Stella cut back  the holly that was encroaching on the path higher up, as well as cutting back some tree branches to reveal the waymark at the top. The path was very narrow at one point where the holly had grown over the path. We widened the path here once the holly had been cut. It's much easier to walk on now. 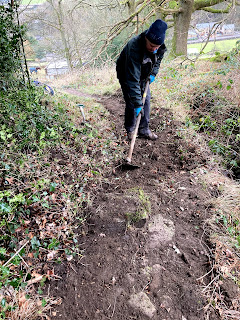 The work was paid for  by Hebden Bridge Mayor's fund.

Types of work done by CROWS, when and where : 2021, Cut back, Drainage, My'royd, waymarking
Newer Post Older Post Home