Two teams were out today working on the river path up Cragg Brook from Dauber Bridge to Clough Foot Bridge. Ian S and Nick set out to add three or four new steps to the bottom of the flight that leads down to the footbridge across Parrock Clough. This gets very slippery in wet weather and improvements were overdue.

They knew that there was a huge tree alongside the steps that had fallen about a year ago, but when they arrived they could find neither steps nor footbridge! In the last week or so, a huge branch had fallen off a nearby beech tree onto the top of the steps and covered them up. Here's the view from the footbridge looking towards the steps. 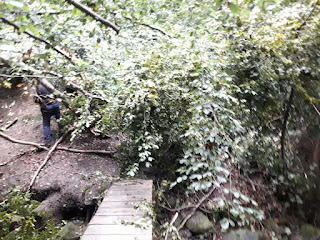 So there was a quick change of plan. They returned to the depot, collected bow saws and loppers, and started to clear the path. After a lot of hard work the same view looked like this, where the old steps can just be seen coming down diagonally from the top left. 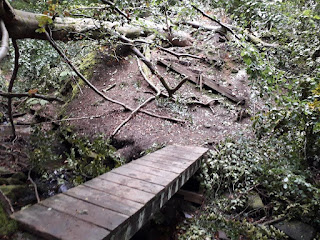 The path is now open again and several walkers came through to prove it. Unfortunately, the job isn't quite complete as the main branch is just too big for a bow saw. For the moment walkers will have to duck under this branch to get to the top of the steps. 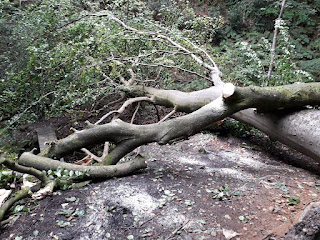 We now need to get some help from a skilled tree surgeon to safely remove the rest of this huge branch - hopefully without further damage to the existing steps.

Meanwhile Paul and Frank S were working 100 yards further up the path. A long time ago a tree had fallen and knocked the fence down on to the path. This meant people were forced to walk in the mud! Here's a photo from last year when it was particularly muddy 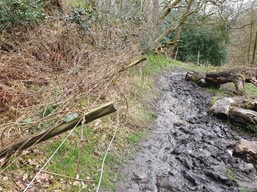 The first job was to remove all the brambles and holly that was entwined in the wire fence, and then to get the fence upright again. This is what it looked like with two temporary props and two new posts installed. Paul is just sitting down for lunch! 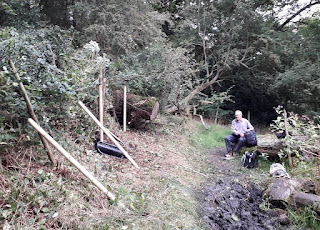 And this is how we left it at the end of the day. There are eight new posts holding up the fence, but the wire isn't yet tensioned and stapled. We plan to return later in the week to complete the job. 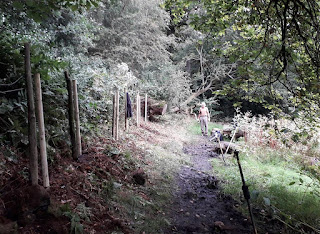 The path is now much improved and there's no longer any need to walk in the mud. After Ian and Nick had finished their earlier work on a fallen tree, they came to help and stabilised the muddiest patch with a drain and some elegant stone paving. 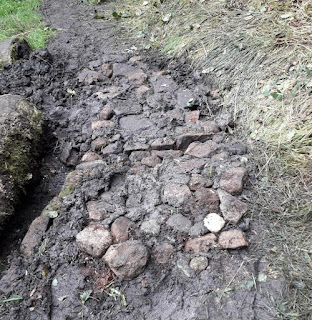 This work was funded by the Hebden Royd Mayor's Fund.

Types of work done by CROWS, when and where : 2021, Cut back, Drainage, My'royd, Upgrades
Newer Post Older Post Home