Mick and Frank S were up above Ramsden Wood near Cranberry Dam.

Along from the two boardwalks completed a few weeks ago there's a deep little clough with very steep sides. It's had a lot of erosion, and in wet weather it's really difficult to negotiate. The solution is a set of ten steps down one side and ten steps up the other side. Waiting by the farmhouse were four bags of timber for the steps all cut to size, but the little clough is half a mile away! So we became pack horses for the day, with Frank pushing the wheelbarrow and Mick pulling a rope tied to the front. And, yes, we did lift it over a stile on the way. But, no, we didn't actually build the twenty steps. That's a job for another team on another day.

We then revisited the new boardwalks to add two missing treadboards - the previous team had run out of them! We then cleared the drains for the bog between the two boardwalks in the hope that this area will dry out enough so a third boardwalk will not be needed.

Finally, we worked on two stiles up near the farmhouse. As you'll see the first one needed new treadboards. 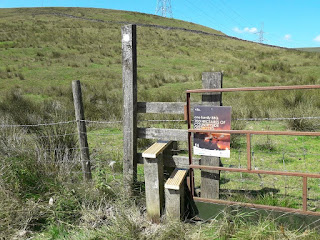 And the second one needed a new leg to support the treadboard. 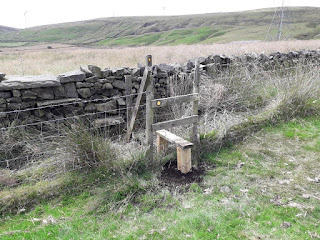 We also added waymarks to these stiles and to the stile further down the field that was built a few weeks ago.

Meanwhile, Ken and Catherine were working nearby to renovate the dilapidated interpretation boards along the Todmorden Centenary Way.