Ian and Rich went up to this delightful area near Blackwood Common - half-way between Sowerby and Mytholmroyd.. 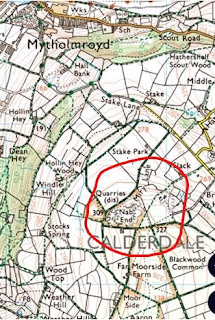 Then a short distance away to put up waymarks and we discovered the stile tread-board support on this popular path was totally rotten.

Then on to a finger post lying on the ground (for some time). Beyond saving so we cut the rotten end off and re-seated it.

Further down the hill we replaced some faded bridleway waymarks. Then onto a footpath to add a waymark and we found the tread-board had rotted off. Not having a spare one, the kind people at Nab End Farm found a piece of wood to suit - many thanks.