The fine weather continued for Rich and Frank H to salvage and rebuild a wrecked stile. Bernard (good to see you!), although conscripted by Eleanor and Lynda for most of the day, provided valuable help at the start and end of this task.

Here's a before picture: 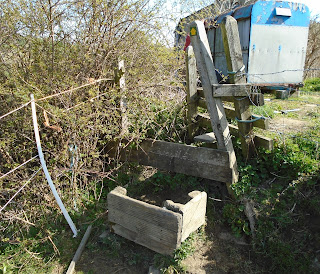 Little that should be vertical is vertical:

Little that should be firm is firm,

Little that should be tight is tight. 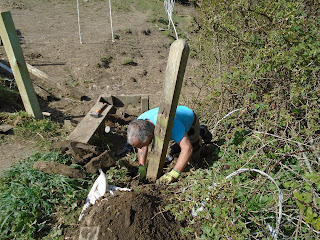 Rich engaged in the lesser-known sport of upright wrestling!

This side-upright was very firmly embedded but had a significant and permanent lean  . . . possibly, but uselessly, indicating the location of some remote faraway galaxy! 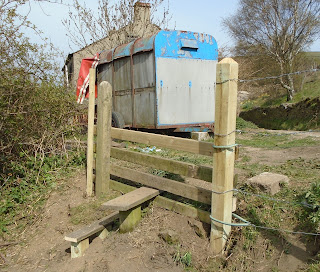 New pole at left-hand end for attachment of temporary fencing.

One new lower step on field side.

Miscellaneous wire fencing on right re-attached (without the barbs!) and suitably re-tensioned.

There may be some additional work to do here (waymark disks, a couple of standard steps on the path up to the stile etc) but the stile itself is user-friendly and provides a horse-proof barrier.

Meanwhile, a field away, Lynda, Eleanor and Bernard did mortal battle with a very narrow path that is bordered by a rusty, broken fence to one side and intruding bilberry bushes to the other. 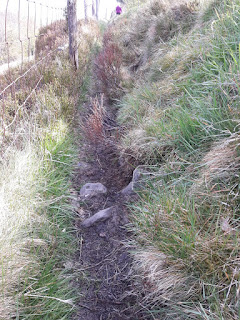 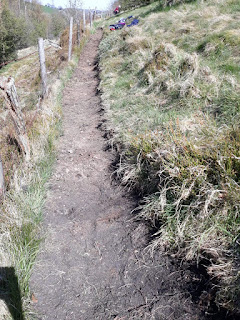 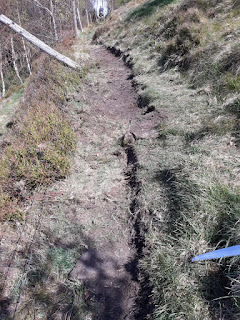 ..... and further down the path, Bernard opened it up wider. Note to self though is to bring a mattock next time. Azads and spades do the business but it's harder work !

This work was funded with a grant from Ripponden Parish Council.

Types of work done by CROWS, when and where : 2021, Cut back, Ripp, Stiles
Newer Post Older Post Home