The main job was cutting back and widening one of the best Causey paths in the area - on the Calderdale Way between Pike Stone Bank and Five Ways. 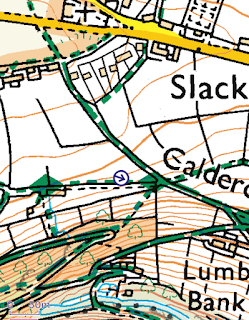 The path had become overgrown and narrowed causing people to divert from the stone surface.

Overhanging vegetation (brambles, saplings, heather and bilberry) was cut back along the entire length of the causey path, making it easier to use.

We then started on clearing the causey stones.

We reckon another session should get the job completed.

Other jobs done were sorting out a turnby drain at Five Ways. (The water coming down Murkin Lane had started to scour the path lower down.)

Several waymark problems were sorted out at Lumb Bank, at Slater Ings and on Popples Common

All the work today was funded by Heptonstall Parish Council.