Bernard, Ginny, Mo and Rich worked on a stretch of one of the Sowerby Walks around the Villages.


Bernard and Mo started by clearing a stile off Pinfold Lane which leads up to the path to Sowerby Castle, cleared a couple of weeks ago.

Rich and Ginny headed down to Brockwell (getting lost on the way!) and, later on, were joined by Bernard and Mo. We were working on the lower path on the map below. 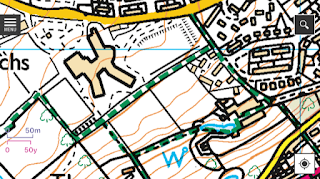 Although the path is locally well used by people from the school and dog walkers, it is not waymarked and would be very difficult for anyone else to find. Several waymarks were put up along the route so others can now discover this delightful route.

The first job was to remove encroaching holly, laurel and tree saplings.


There was a long section that was sloping and very slippery, so we decided to re-align the path so it followed its original route.

The bad news is that we spotted Himalayan Balsam already seeding. We knew it was around on this path, but this is early to be seeding. We are contemplating putting up a notice, encouraging people to pull up the balsam as they walk by.

We haven't finished leveling the path. There are more steps to clear and some waymarking to do. We will be back on Monday .

Work funded by Sowerby Residents Association who were funded by Tesco Bags for Help.

Meanwhile Catherine and Frank S were at Shackleton on the path running down towards Hardcastle Crags. The stile where the path enters the woods had a broken top rail, and so we replaced it, added a grab rail, and cleared the steps in front. 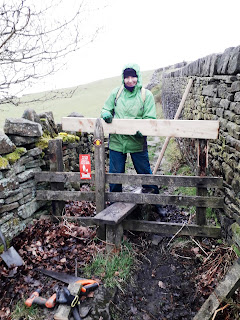 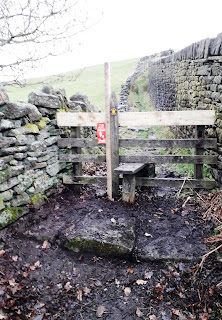 We then cleared the stones that had fallen onto the path from the walls each side and uncovered some lovely old cobbles. Finally we painted a yellow top on the finger post at the other side of Shackleton and cleared the brambles and nettles from the gap stile in the wall. 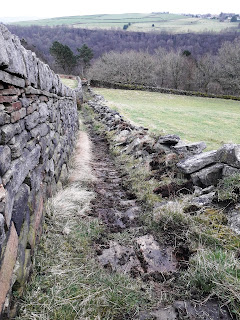 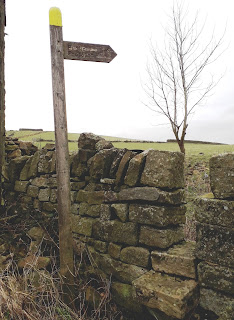